Perfect examples of military architecture that have characterized this territory for over two centuries. The strategic position of the island of La Maddalena in the Mediterranean has given it an ever-increasing military interest since the second half of the 1700s. The perfect place to hold off smugglers, the Barbareschi and the attempt of French revenge always at the door. The defenses were positioned mainly on the island of La Maddalena and that of Santo Stefano (Guardia Vecchia1, Balbiano2, Tegge3, Carlo Felice4, Casemattata tower and the fort San Giorgio5). The increasingly modern and sophisticated armaments made these structures obsolescent, which were gradually abandoned.

Towards the end of the 1800s, however, we returned to thinking of La Maddalena as a strategic pole, not only to defend against the French invasions but from all over the Western Mediterranean. Batteries with greater firepower were then made along the coast (Opera Nido d’Aquila6, Opera Punta Tegge3, landing at Punta Sardegna, Opera Punta Rossa7 and Opera Capo Tre Monti) but also on the surrounding hills (Opera Guardia Vecchia1, Opera Colmi8, Opera Trinita9 and Opera Punta Villa 10). The same fate went to the Caprera Island, on the land expropriated by the heirs of General Garibaldi the Opera Arbuticci11, the Opera, were built Poggio Rasu12 lower and upper one. 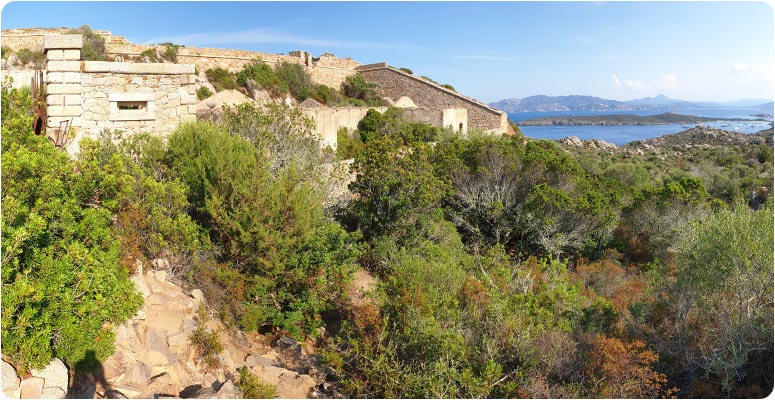 The technological progress in the military field made all these works, first fundamental and functional, extremely fragile and vulnerable to air attacks. It was therefore necessary to resort to greater attention to mimicry. Thus were born the batteries built with concrete and granite boulders, to recreate with the utmost fidelity the rocky and tormented landscape of Sardinia. These works can still be observed on the Spargi Island (Zanotto13, Pietrajaccio14 and Cala Corsara 15), on the Caprera Island (Candeo16, Mass of the Deer, Poggio Baccà17, Punta Coda and Isola del Porco), on the Santo Stefano Island (Punta dello Zucchero) and of course on La Maddalena Island (Spalmatore)18, Guardia del Turco19, Carlotto8 and Puntiglione).

These works are of particular interest as evidence of how the logic of defense determined the morphology of the place and induced military engineers to omit all the logics hitherto used to exploit the environmental elements in their favor.

We use cookies, including third-parties, to improve navigation. By continuing, you consent to their use as indicated in the Privacy Policy.ok